Carried into orbit by a Soyez-TMA spacecraft atop a 50m-high rocket, Tim spent six months aboard the International Space Station (ISS) orbiting the Earth every 92 minutes at over 17000 mph (27000 km/h). During that time, he played a vital role in helping to push forward the boundaries of human understanding by carrying out unique scientific research experiments in biology, space physics and materials science in the weightless environment of space, as well as maintaining and upgrading the Space Station itself.

Tim returned to Earth on 18th June 2016, leaving the ISS with crewmates Tim Kopra and Yuri Malenchenko in their Soyez capsule, which deorbited, reentered the atmosphere and parachuted down for a soft landing on the Kazakh steppe, cushioned by a final burst from its engines.

On 15th January 2016, Tim became the first Briton to walk in space, taking the Union flag through the Quest airlock of the ISS to begin a new chapter in British exploration.

Working alongside NASA's Tim Kopra, he helped replace a sequential shunt unit to convert power from the Station's solar arrays at the extreme end of the main truss, around 50m (160ft) from the pressurised modules. This task had to be performed during eclipse, in Earth's shadow when no power was generated by the arrays, which the pair successfully completed together in good time, before separating to install a non-propulsive vent (Kopra) and network cabling (Peake) on the outside surfaces of the pressurised modules. 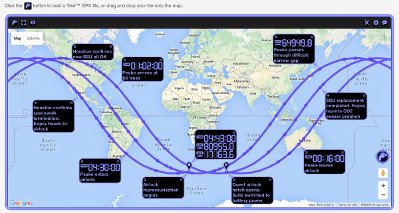 Four hours into the spacewalk, Tim Kopra reported a water leak inside his visor which led Houston to terminate the mission earlier than planned, due to the potential risk of drowning. Kopra returned to the airlock, pausing for a visual inspection of his visor by Peake, who then secured the work in progress and retrieved a pistol grip tool before joining his colleague in the airlock to close the hatch, repressurise and officially complete the US EVA 35 mission.

Tim Peake was the official starter of the 2016 London Marathon, and began his 26.2 mile (42.2 km) run on the Colbert treadmill in the Tranquility module of the ISS at 10:00 BST, the same time as the mass start in Greenwich.

Running in a weightless environment poses a number of problems, both for the runner and for the space station. A special harness must be worn around the waist and shoulders, similar to a backpack, with elastic straps securing the athlete to the treadmill base to prevent them from simply flying away on their first stride, and a system of springs and dampers reduce vibration from each step, which would otherwise interfere with the sensitive microgravity experiments elsewhere on the ISS. 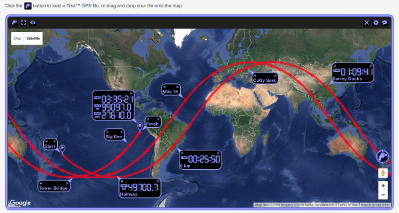 Tim completed his London Marathon from orbit in very creditable 3:35:21, just a few minutes behind his 2006 time of 3:18:50 on Earth, and travelled over 61000 miles (99000 km) in the process. Meanwhile in London, Libby Jackson (UK Space Agency) and Jon Scott (ESA) ran the race wearing replicas of the Russian Sokol spacesuit, worn by Tim aboard the Soyuz spacecraft for his launch and landing trips.

To celebrate the success of the Principia mission, Away Team has produced downloadable files to commemorate two of Tim's iconic achievements in space.

In keeping with the educational spirit of Principia, our enhanced GPX downloads include details of time, location and altitude, together with estimates of Tim's distance from the Russian Zarya module ('заря' meaning 'dawn'), which was the first part of the ISS to be launched and is the object tracked by NORAD. Annotations are included to form a narrative as you explore, identify points of interest and relate events in space to locations on Earth in a way that will help to engage and inspire this generation and the next. 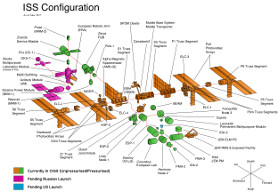 Find out what else you can do with Trkd Maps or download our Trkd GPS app for Android to record your own adventures and explore your world.